November 25, 2017
Post Overview
Add a header to begin generating the table of contents

The hypertension guidelines have changed significantly.

This is the first major hypertension guidelines overhaul since 2003.  I highlight what you need to know in this video: 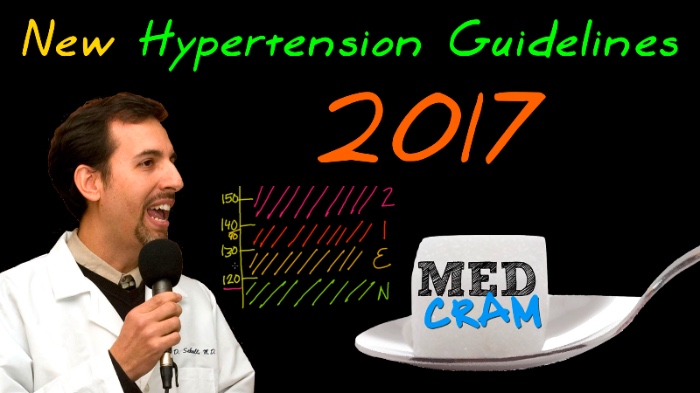 Here’s the video transcript from the video link above:

So let’s get started, so the first thing that I want to do is I want to give you a sense about what’s happened between these two periods of time. To do that I’m gonna split the screen into two areas. And on the Left we’re gonna have JNC 7.  And now we’re gonna have the 2017 guidelines here on the right.  I want to kind of break this up into the systolic blood pressure, just for clarity.  So here at the bottom we’re going to have 120 and then as we move up we’ll have 130 and then even as high as 160. Now I’ll add the diastolic numbers in a moment but I think the guidelines are easier to remember initially with just the systolic numbers.

In JNC 7 they said that anybody less than 120 was going to be okay in terms of a systolic blood pressure. That was considered to be normal when they hit 120 all the way up to 140.  That range was considered to be what they called pre-hypertension.  This was supposed to be a yellow light kind of like a traffic light that occurred here at 140. This was supposed to give pause to people who had blood pressures between 120 and 140.  Then they went out full and said okay you have hypertension Stage one if you were above it.

If you’re between 140 systolic and 160 systolic, this was definitely red light area. That was known as stage one and then things got really bad up here… if you’re above 160 and that they called stage 2. So the thing about JNC 7 was that you had this normal range.  Which is where they knew you have to be to make sure that you didn’t have an increased probability of having morbidity from hypertension like stroke or coronary artery disease. Then there was this kind of gray zone where it was prehypertension.

And they recommended diet/ lifestyle changes to try to get that down. They knew there was an increased risk but they really didn’t call hypertension “hypertension” until you hit this magic number of 140. I’ll put here in small 140 over 90 because that was a key area. Well the new guidelines also agree and they’ve kept 120 as normal – no question about it.  However, for the first time, they’ve gotten rid of prehypertension. Instead of pre-hypertension they still have this yellow zone here but they’re calling it “elevated.”

So between 120 and 130 was pre hypertension.  They’re now calling it “elevated blood pressure.” Now between 130 and 140 they’re saying you have high blood pressure and they’re calling that stage one. Basically, anything above that is stage two. They’ve condensed the strata and made them lower. This means that for any given blood pressure you’re going to see that people are going to be ruling in for hypertensive disease. Still, 120 is the cutoff. For people in this range of 130 to 140 they’re gonna be classified as having hypertension.

They have some interesting things to say about that because some studies have come out since 2003 about that particular thing. They had some recommendations as well and actually they came with the actual reduction in blood pressure that could be associated with each of these reductions. So they said that there was about a 4 to 5 millimeter of mercury and that may sound small but you have to remember that at any particular drug is anywhere from 7 to 10 so this is not that weak in terms of its effect.

If you wanted a 4 to 5-millimeter reduction in blood pressure got to do a low sodium diet increase dietary intake of potassium exercise and limit alcohol intake for a man less than 2 and for a woman less than or equal to one drink.  At the same time what they found was that if you wanted to have an 11 millimeter of mercury drop, decrease sodium intake decreased saturated fats, increase fruits and vegetables and increase grains.

They had the same recommendations they’ve had in the past regarding the four different categories of medications. The ACE ARBs the beta blockers, the calcium channel blockers, and the diuretics. They said that all of these are first-line agents to use except the beta blocker. Of course, beta-blockers would be great if the patient has concomitant coronary artery disease.

In terms of diuretics even though a lot of people use hydrochlorothiazide the actual studies have been with chlorthalidone. It’s once-daily there is some evidence that it actually is more efficacious. They’re recommending chlorthalidone unless of course, the GFR is less than 30 in which case thiazide diuretics don’t work very well.  When the GFR is thirty then you switch to Lasix.  Lasix is also a good option for patients with low ejection fraction from heart failure.  Preoperative issues they’ve talked about before you don’t really want to stop a beta blocker if a patient’s going into an operation.

So the hypertension guidelines recommendations haven’t changed much in terms of the medications. If you want more information on all of those types of medications and more, make sure you watch our video on hypertension.  What’s really changed is the classification. This will result in about 46 to 47 percent of adults in the United States as having hypertension. This means that they would have a blood pressure that is elevated or greater than 120.  And that’s pretty significant portion of people in the United States to be deemed as having elevated blood pressure. Again this is under the guise of getting on things earlier and treating. There are explanations out there for these new guidelines and I encourage you to look those up.  Thanks for joining us.