August 27, 2017
Post Overview
Add a header to begin generating the table of contents 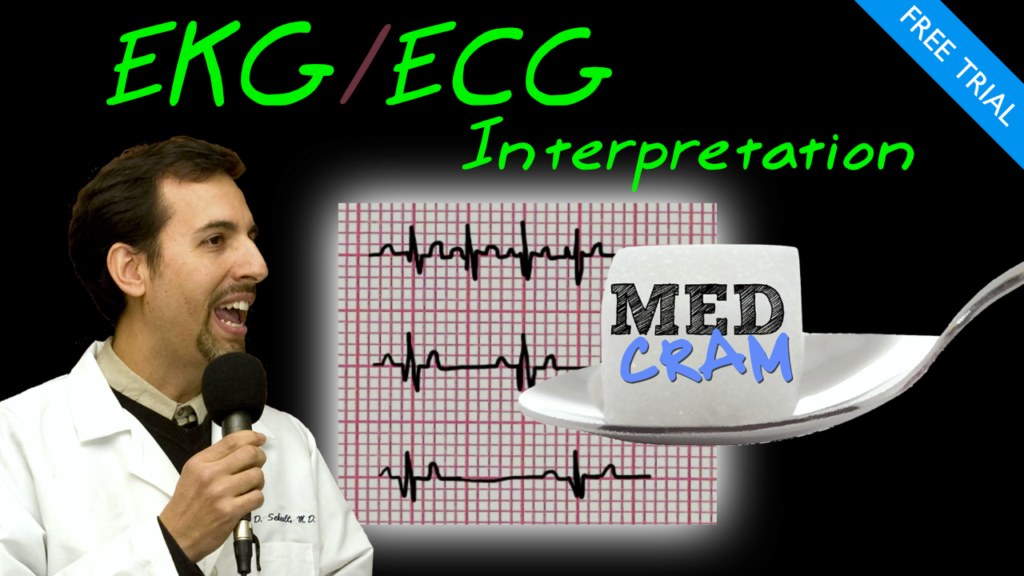 Below is the transcript of the first ECG video of the course:

“Welcome to EKGs explained clearly. By the end of this course, you’ll have all the skills needed to competently interpret EKGs in a systematic way. You’ll understand the electrical activity represented on EKG paper that allows.. this process to happen: The heart to beat and cycle blood through our lungs and bodies, this is the final product.

Whether or not you have experience with EKG interpretation, I think you’ll find this series of videos very useful. If you understand the key foundations of how the heart works, it’ll be much easier to learn and remember the nuances and pitfalls with the EKG that we’ll cover later in this course.

So we’ll start with the anatomy and physiology of the heart, depolarization, repolarization and then on to leads and specifics about EKG paper and how a tracing is captured. Next are specifics on EKG tracing, the P wave the QRS complexes, the QT interval, the R2R interval etc.

We’ll talk about T waves, ST segment and T wave changes that we see with ischemia, bundle branch blocks, and vesicular blocks, and then at the end we’ll put it all together and teach you how to systematically read an EKG, we’ll go through a normal one first and then on to a variety of abnormal EKGs like sinus tachycardia, atrial fibrillation, multifocal atrial tachycardia, first, second, and third degree heart blocks, atrial enlargement, left ventricular hypertrophy, hyperkalemia, rare anomalies, and many many more abnormal EKGs..

This is the pulmonic valve here, the semilunar valves, as you can see, and then what you can’t really see very well is the aortic valve which is here at the top. This is where the left ventricle is pumping out into there.now one of the things that I want you to notice first off is if you look carefully you’ll see that the right atrium here beats before the right ventricle… right atrium right before the right ventricle. And you’ll also notice similarly that the left atrium beats right before the left ventricle. now this is because of the anatomy of the conduction system there is an electronic conduction system in the heart that is not made up of nerves but instead of modified specialized myocardiocytes.

Up here is the sinoatrial-node which because of its relatively quick activity is the pacemaker for the whole heart. It then goes to the atrial ventricular node which is here and then goes down this conduction system here called the His-Purkinje System and as you can see it goes up and it basically conducts the electric signal to the myocardium. Now we’re gonna talk more about this in detail but I wanted you to notice that it’s this conduction system that basically makes this movement that we’re seeing right here like a perfectly well-timed symphony. It depends on the analogy that you want to use there are several different analogies that you can use. The conductor that is conducting a symphony and you want to make sure that the violins, and the cellos, the flutes, the viola, and the timpani — they’re all acting all at the same time so you get the maximum effect. In other words, everything is working in concert.

The other way of looking at it is a little bit more destructive you know that if people are trying to demolish a building they will have certain areas of the building that are drilled out and weakened with sticks of dynamite. When they activate that dynamite it has to be activated in just the right order in just the right fashion so that the building comes down right on top of its footprint. Well, this is kind of what’s going on here with the heart this electric conduction system. The sinoatrial, the atrioventricular, and the His-Purkinje system is activated in such a way that the electrical conduction goes and stimulates the heart in concert.

It travels down very quickly down this His-Purkinje system and then up here into the myocardium. So the effect is is that essentially the myocardium is contracting all at the same time — and you want that to happen. Instead of having contraction occurring from the top down you want contraction occurring all at the same time because of this very unique conduction system. This is going to look very unique on an EKG. What is an EKG? It’s a way of measuring current. You know that when you take a battery and you place it on a voltmeter if you put the positive end to the positive meter, and the negative end to the negative meter, you’re gonna move the dial up so that you see that there is a difference in the voltage. When that voltage starts to move that is when you have an electric current.

So what an EKG does is it sees how is this depolarization or this movement of positive charges that are going down the His-Purkinje system– how does it look from the electric “vision” if you will. In other words, if I have an ultrasound machine I could see if there is fluid or fluid moving on the ultrasound. What an EKG does is it does exactly the same thing except instead of fluid moving and objects that you could see, you’re seeing electricity moving. So that is what we’re going to look at today atria contract first then ventricles contract second but they’re contracting in concert. And then what happens is everything resets back to normal and you have the same contraction happening again the next series.

We’re going to break things down to the smallest level and then we’re going to build it up so that we can finally see how we get back to this point again. So zooming in a little bit more now in terms of where we were, let’s pull away all the muscular activity here and let’s look specifically at this conduction system.

I want to be very clear the thing that you’ve got to understand that these are not nerves. These are modified myocardial cells that conduct electricity very quickly.  We’ll talk about how that happens. So the first one that you’ve got to know is the sinoatrial node it is at the very top and the reason why it is there and is the pacemaker is that its intrinsic activity is the fastest. Since it is the fastest it’s going to cause depolarization to occur all the way down and everything else is going to have to be in concert. So this is kind of the conductor of the concert. Now there are different pathways to get to the AV node. You can see here that the SA node goes to the AV node now the AV node is right here and it kind of holds things up.  It delays things. We’ll talk about that in another lecture.

What you have here is you have the sinoatrial node saying okay it’s time to contract. We’ll talk about how that happens and the atria contract and then the electrical conduction gets down to here and it holds up what effectively allows the heart to pump blood from the atria down into the ventricles, and allows it the time to pump. This happens so quickly SA node to AV node then when the blood is in the ventricle, the AV node then conducts this depolarization that’s occurring into the His-bundle system and it travels down and around — so quickly, so very quickly, that essentially the entire myocardium that this innervates basically depolarizes almost all at the same time.

So to get a little bit more of the insight about what’s going on let’s go down to the microscopic level and I want to show you a myocyte here. Now the thing that you should know about a myocyte is just like any other skeletal or smooth muscle cell, it has a collection in it called the sarcoplasmic reticulum we’ll call that SR. The SR is full of calcium and the reason why it’s full of calcium is that this calcium can be released into the cell upon depolarization of the cell. We’ll talk about that, and that’s gonna cause contraction of the striated muscle so we’ll just put a bunch of muscle cells here that’s going to contract.

If you were to look histologically at the areas of the myofibrils that are in cells you’ll see how muscle cells work. Basically, calcium is what’s gonna activate them to contract and they’re made up of troponin and all of these other things that we won’t get into. The key here though is the sarcoplasmic reticulum causes calcium to be released and that’s what triggers it. The question is what triggers the sarcoplasmic reticulum? Well what happens is as you may know on the cell surface of these cells you have a sodium potassium pump and the purpose of that is to pump sodium out of the cell. As you know, sodium has a plus one charge, and at the same time pump in potassium and potassium has a positive one charge but it pumps out three sodium for every two potassium.