November 3, 2017
Post Overview
Add a header to begin generating the table of contents 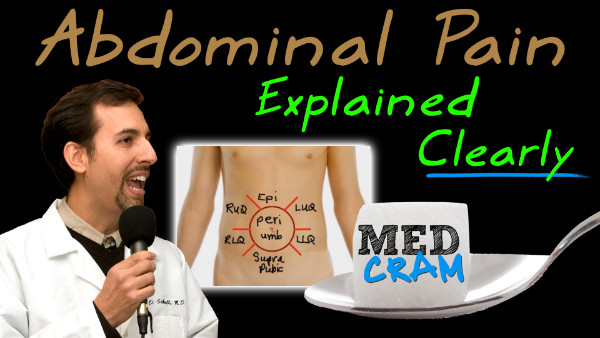 Below is the audio transcript of a portion of the first video:

In this series, we’re gonna start with an adult patient who presents to the emergency department, or clinic, with abdominal pain. We’ll walk through the process, step by step, of evaluating the patient and creating a differential diagnosis, so we can treat the patient.

Now you should know that about five to 10% of emergency department visits are related to abdominal pain. And so we’re gonna discuss immediate life-threatening causes, or surgical emergencies of abdominal pain. But assuming that the patient’s stable, we’re gonna work through the following four questions with our history and physical examination.

Now this lecture series, is not meant to be a comprehensive discussion of every potential cause of abdominal pain. That would take several days, but I wanna give you a system to evaluate abdominal pain while highlighting some of the most common and most life-threatening causes.

The first question is, could it be extra abdominal? The second question is, is it local or diffuse? And if it is local, where exactly is it? Is it persistent or intermittent? And finally fourth, are there any associated signs, or symptoms associated with this abdominal pain? Okay, so let’s jump into our first question. And as you can see, there’s a number of different reasons why you could have abdominal pain that are outside of the abdomen.

We’ve got different categories here: cardiac, thoracic, neurological, etc. The ones that I’ve got filled in here, are the ones that I think you absolutely gotta know, because they’re common extra abdominal reasons to have abdominal pain. And the first one is, MI. You’ve got to know that one because it’s dangerous. The next one is very common, that’s pneumonia. It’s in both categories for thoracic and ID.

The other one that you’ve gotta know and it’s pretty classic, is DKA. Sometimes patients will come in with DKA, with elevated white counts and abdominal pain, and you’ll never find anything. But it’s not a reason not to ignore it, because it’s DKA. Just realize that DKA can cause abdominal pain even though there’s actually nothing going on specifically in the abdomen.

Another one that goes to that category, is porphyria. So know these, and I’m gonna fill in the other ones. And you can see here that there are many others, and even more than the ones that I’ve put down. But the ones that are underlined in yellow, are the ones that are the most important to know for extra abdominal.

The second question, is the question of location versus the diffuse. So, it’s best to go and actually look at an abdomen. So this is the normal way, that we divide up the areas, quadrants, locations, or zones of the abdomen. Here we’ve got the epigastrium here at the top. We’ve got the suprapubic at the bottom.

So a big one to watch out for, for focality is of course the right upper quadrant. That’s gonna be a big one. The reason why I’m underlining it in green, is I want you to think about bile or biliary, and with bile you’re also gonna think about liver. Cuz this is where the liver and the gallbladder sits. So think about hepatitis, or cholecystitis. That’s where you have inflammation of the gallbladder.

Think about cholangitis, where you have inflammation going up the biliary tract. Think about biliary colic. Think about pancreatitis. Because it’s very close to the lung, think about subdiaphragmatic abscess, or even pneumonia, or empyema that’s being referred down from the lung. So right upper quadrant is very important, because of its findings there.

Because of the liver and the gallbladder, think about getting an ultrasound. That’s usually gonna show you best, if you’ve got right upper quadrant pain. So, it’ll even show you better than a CAT scan. A Cat Scan looks at the abdomen very well. We’ll talk about that later, but an ultrasound is gonna look at those structures in the right upper quadrant even better, typically, than a CAT scan.

The right lower quadrant, is where we typically find appendicitis when it is presenting late in the course. It’s at McBurney’s point, which is about 2/3 the way from the periumbilicus to the anterior superior iliac spine, and that is because we see early on often it’s diffuse tenderness that goes to the periumbilicus or the epigastrium. And then later on when it breaks through, and actually maybe causes a rupture, it irritates the lining of the peritoneum specifically in that area where the appendix is. And that’s why you feel it in the right lower quadrant.

The key diagnostic imaging for that is gonna be a CAT scan. You’re gonna wanna get a CAT scan and not an ultrasound. That’s not gonna show that very well, and that’s associated with the right lower quadrant.

And the last one is the gastritis or stomach. So think about SPNG; spleen, pancreas, and gastrum here in the left upper quadrant. So think about a splenic abscess, splenic infarct, especially in your Sickle Cell patients. Think about gastritis, gastric ulcer, or finally pancreatitis. Also because the stomach moves over here to the epigastrium, the epigastrium will sometimes carry referred pain.

So it’s not a gastritis, but actually a myocardial infarction, because of where the diaphragm sits in relation to the inferior portion of the heart. And you can see this classically in diabetics with ST segment changes in leads two, three, and aVF. Which will then cause epigastric, abdominal pain, nausea, vomiting, etc. And for more information on reading EKGs, and being able to do that, look at our course on EKGs.

Okay, in the two areas that we’ve got left here, is the periumbilicus and the suprapubic. The suprapubic you’re gonna see, this is pretty understandable in urinary tract infections, or if there’s a suprapubic catheter. Often it’s gonna be referred up from the bladder, and periumbilicus, as we kind of alluded to before, is what you’re gonna see in early appendicitis, because the intraluminal aspect of the pain is poorly localized.

But when it gets so large, that it’s actually starting to inflame the peritoneum, that actually becomes later advanced down here to McBurney’s points once again. And that’s where you’ll see things late in the course. Okay, join us for the next video when we talk about questions three and four after we finish up diffuse…