The Key Differences Between Nephrotic and Nephritic Syndrome

May 27, 2017
Post Overview
Add a header to begin generating the table of contents 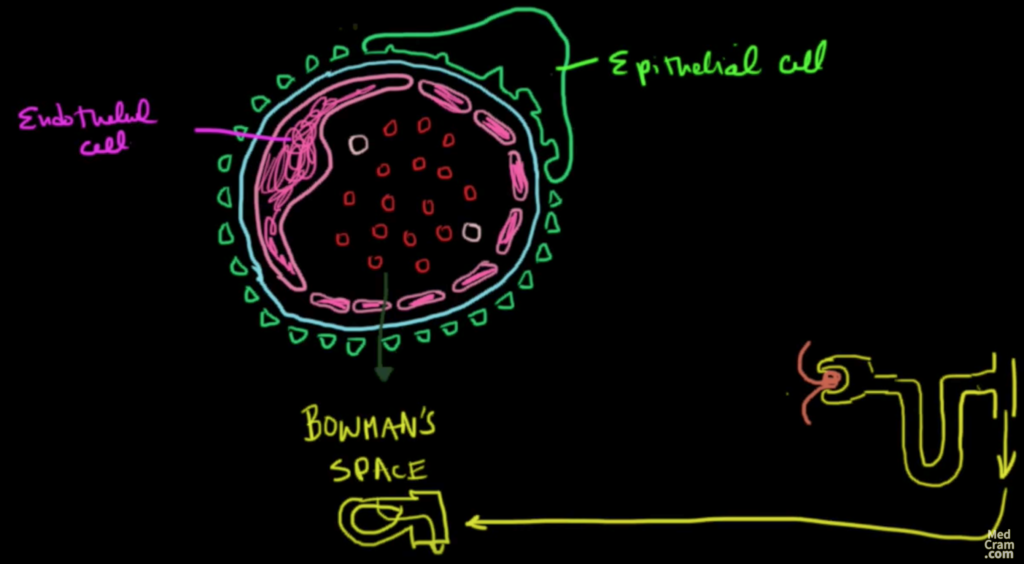 The following is a transcript from Nephrotic versus Nephritic Syndrome Explained Clearly:

To understand that we really need to get into the pathophysiology of how these syndromes are different.  If you look at a cross-section of the capillaries in a kidney, you’ll see among other things, the endothelium. It’s the endothelial cell that completely surrounds the lumen of the vasculature. Little slits in the endothelium allow things to get through… but not the red blood cells. The basement membrane is also involved, which is permeable to a number of things, and then finally on the outside is this epithelial cell. The epithelial cell has little foot processes (podocytes) that look like little triangles around the edge.

Basically, these form a very tight sieve which allows only very small things to get through, typically not even proteins are allowed to get through here. These podocytes are helpful: Imagine that when fluid leaves the vasculature lumen and goes through the slits in the endothelium and the basement membrane and comes out even through the podocytes of the epithelial cells in the kidney what we’re left with here is basically “Bowman’s Space”. This is in Bowman’s Capsule, of course, and all of this fluid eventually, unless it gets reabsorbed, is going to go down into the toilet.

So anything that gets outside this area is going to eventually end up in the urine I think that’s a very important thing to remember if you can remember the schematic of what a glomerulus looks like you remember that you’ve got a vascular Chur that comes in and then leaves and you’ve got a Bowman’s capsule here that picks that up. 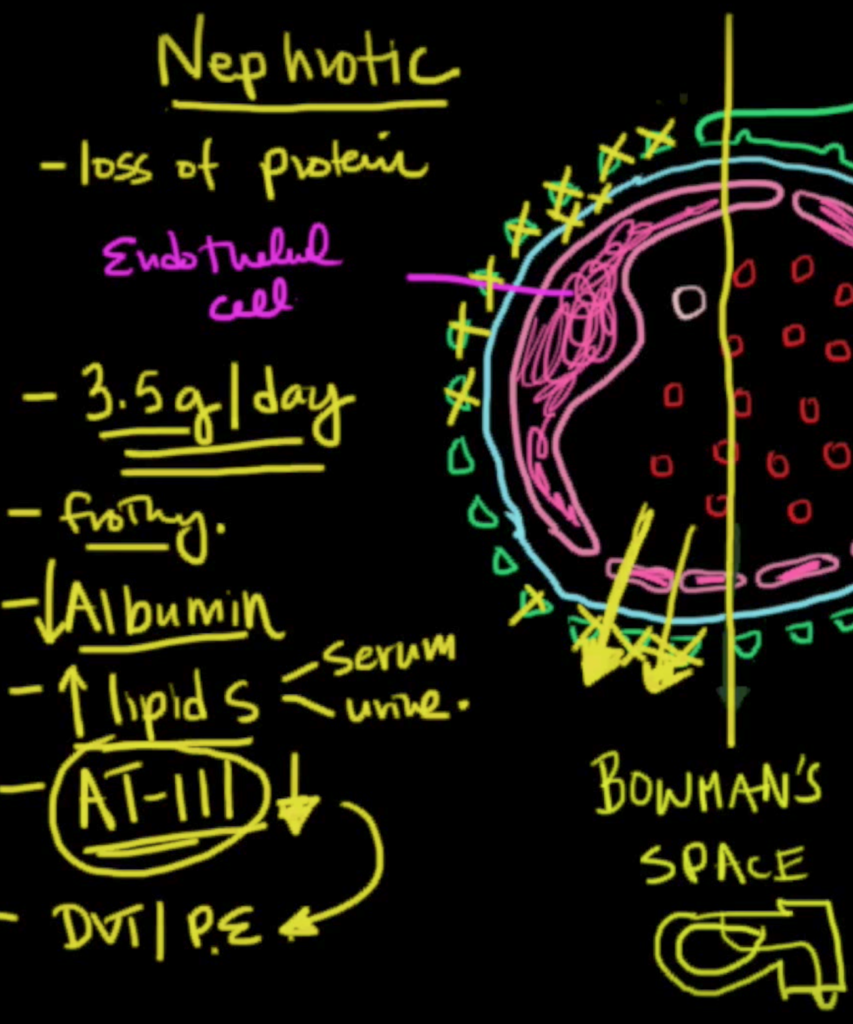 Nephrotic syndrome is fairly straightforward it’s a process where for some reason these podocytes which are all connected to the epithelial cell aren’t working or they get lost or they recede or they involute something makes them disappear and as a result of that they’re not able to keep the protein in. As a result, there is loss of protein. It’s quite substantial in fact on the order of 3 and 1/2 grams of protein per day can be lost. Now this tremendous loss of protein has its consequences one of the first symptoms that you’ll see is that the urine is very frothy. Plus frothy urine is caused by protein in the urine now don’t get alarmed if your urine is frothy because there’s a certain amount of protein that’s in there naturally I guess there is some surfactant and the other type of chemicals that will make naturally your urine frothy but if it’s especially frothy think about protein in the urine.

As a result of this you’re also losing protein so if there’s not enough protein in your intravascular space you’re not going to be able to keep that fluid in the intravascular space and you’re going to have more leakage of fluid. So this is what we see in patients with loss of protein is they become a de mattes and they’ll have edema just about all over their bodies periorbital even in their legs and sometimes even in their lungs. Probably the main loss of protein is albumin. Albumin is the major protein that keeps fluid in the blood vessels.

When albumin goes down because of its loss the liver has to compensate and when the liver compensates we get increased lipids in the blood. This is another sign of nephrotic syndrome there’s also another protein that’s lost called antithrombin 3. Antithrombin 3 is a very important anticoagulant, in fact, it’s the same protein that heparin utilizes to exert its effect. The point is is that if antithrombin 3 is also going down in the situation the patient is going to have a hypercoagulable state and since this protein is lost here in nephrotic syndrome because these podocytes are not working very well, the renal vein this is the blood going back after it’s lost is going to be especially poor in antithrombin 3 and that’s where we tend to see thrombosis and if there’s thrombosis in the renal vein this could embolize and you could get blood clots to the lung. Thus you should think of DVT s and pulmonary embolisms or Pease in patients with nephrotic syndrome. 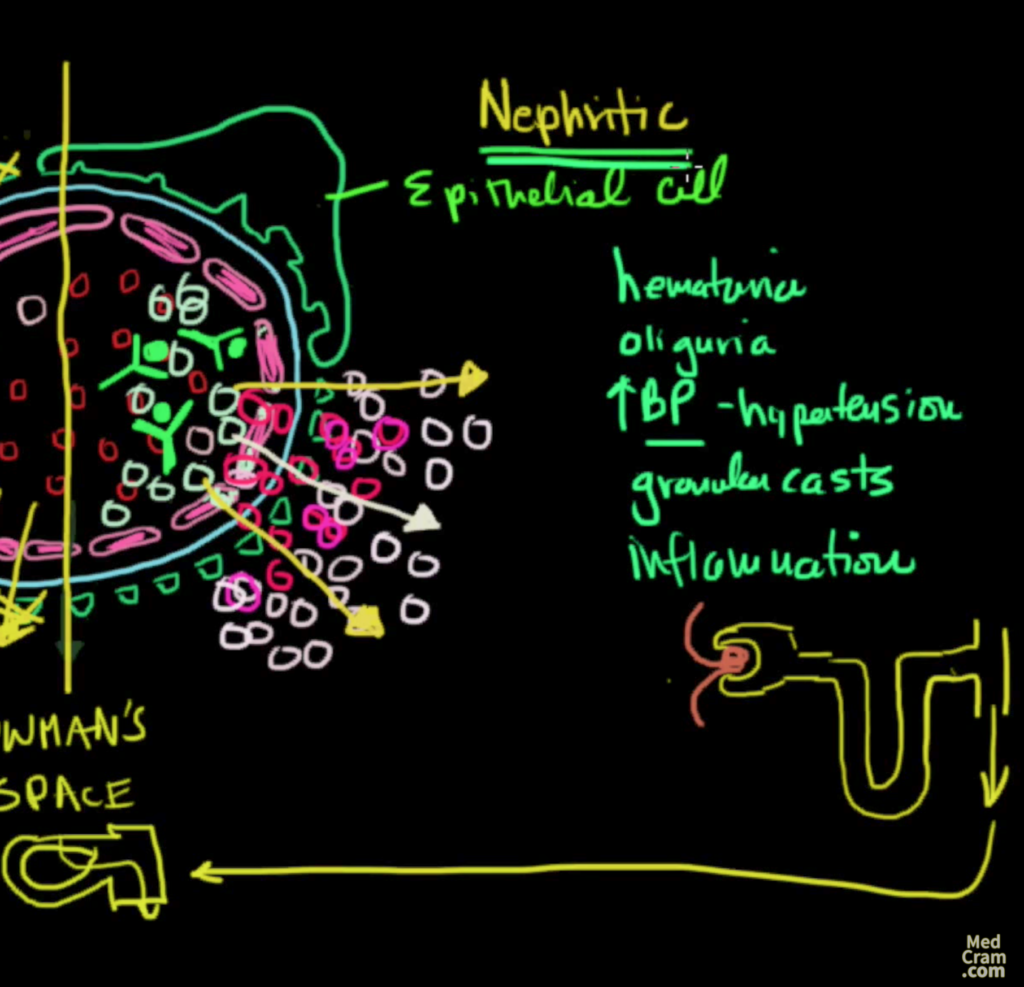 On the nephritic syndrome side completely different mechanism of action for causing nephritic syndrome. Whereas before there was a problem with the loss of podocytes, in nephritic syndrome what we have is immune complexes. An antibody meeting up with another antigen and complexing — this type — of an immune complex will lodge itself in the capillary as seen in the picture with green human like figure. And it will elicit an immune response against these capillaries and against these antigens now as a result of this a number of white cells are recruited as drawn here there will be many more white cells.

As a result of this inflammatory response to these immune cells these areas will become inflamed, breakdown and it will allow red blood cells to pour through these openings. Not only that but also white blood cells to come through and of course since these openings are big enough for whole cells to get through there’s also very easily allowed for protein to come through as well. And so very often even though the patient may have nephritic syndrome, they may also have what we call nephrotic range protein area. The protein may also be high leading to all the things that we saw over here in nephrotic syndrome but in addition to that there’s something that’s very very different.

1.The first thing we see is hematuria (blood in the urine)

2. The next thing that we’ll see is oliguria or low urine output and that’s because the glomerulus is being damaged and so it can’t filter as much because this immune deposition here is not going to allow the free filtration of filtrate. It’s going to become inflamed and the glomerulus is going to start to shut down that causes a low GFR.

3. The other thing that you’ll see is high blood pressure (hypertension) because of that lack of filtration.

4. The last thing you’ll see is granular casts so this is the main difference between nephritic and the product usually there’s more inflammation on the nephritic side… there’s typically less on the nephrotic side.